8 Ways Bitcoins Are Better Than Cash

Bitcoins are better than Cash.. Here is why.

Let’s face it, cash may no longer be king. A newer more efficient asset class may be taking the throne. Bitcoin is becoming more popular as the US dollar and other fiat currencies lose their steam. 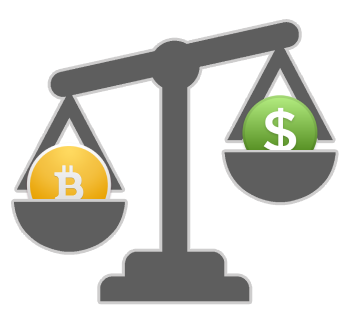 Once recognized as the world reserve currency and monetary exchange for all oil transactions, more and more people are seeing the flaws in cash and seeking alternative ways to insure their money.

Gold has always been the best place to store your money during economic uncertainty but in today’s digital age, Bitcoin is recognized as gold 2.0 as it shares many of the same properties found in gold.

Let’s explore this more and see why we believe Bitcoin and crypto in general is better than cash.

Most people who hold cash don’t keep it in a safe or mattress. They use a bank. The problem is banks don’t have 100% of the cash available that is deposited by their members. Typically a bank only keeps 2% of reserves on hand. This is not a problem when you trust you can access your money via a debit card or go into a bank to withdraw your money. Thanks to a new law in March of 2020, banks now need to hold zero funds in order to lend money. What happens when all the members of your bank attempt to withdraw their funds at the same time? Do you think the money will be there if they had zero money for the loans in the first place?

When citizens lose faith and confidence in their government issued currencies and their banks promise to secure their funds, a bank run occurs.  The latest examples of this is when citizens in Greece and Argentina were denied access to their own money and were limited to how much could be withdrawn per day. Greece citizens could withdraw 40 Euros a day. Equivalent to $45 US dollars.

For many families, they could not get enough money to take care of their basic needs. Fortunately, people could send Bitcoin and crypto to these people when the banks rejected them from getting their own money.  We are foolish to think it can’t happen in 1st world countries. I think people are starting to see the cracks in the system that Covid exposed. We are not invincible after all.

Bitcoin and cryptocurrency is decentralized by nature and it’s not necessary for banks or financial middlemen to get involved.  Your coins are permanently stored on a digital ledger and nobody can interfere or manipulate the quantity of coins in your wallet.

You can access your funds from any computer or mobile phone from anywhere in the world without getting a bank or accountant involved.  This means not only do you have full authority over your money but you are not paying the insane overhead fees needed to pay all these salaries.  All this money goes right back into your pocket.

Since you don’t have to keep your money in banks and there is no middlemen to watch your money, you can move as little or as much as you want anywhere, completely anonymously with zero restrictions.  Unlike banks that have delays on large amounts of cash withdrawals or transfers, you can move your money freely to any location on the planet.

You can also travel abroad and bring money with you discretely and safely.

Bitcoin connects the world in ways banks can only dream of.  A few billion people have no access to a bank account. This means they have no efficient way to transfer money or exchange value. Bitcoin brings banking globally to every individual.

Unlike banks and financial institutions who don’t like to work after 5 PM or on weekends; Bitcoin works for you 24/7. All you need is a phone or laptop with internet access and you can send or receive Bitcoin around the clock.

Sending money overseas is expensive and takes a long time. You can order a product from Amazon and get it to your house faster than you can send money to Europe or Asia. It’s time we evolve our money like we have everything else in our lives and bring it to today’s technological standards.

This is what Bitcoin and crypto is. It’s the future of money. It’s much faster, efficient, secure and more reliable than traditional banking systems that often fail when overloaded with requests.

Bitcoin is deflationary by design. We won’t have governments stepping in with quantitative easing measurements (excess money printing) or manipulating interest rates. Bitcoin will continue to go up in value by design because it gets more difficult and more expensive to produce BTC overtime.

Unlike governments that print so much cash it becomes worthless, we should see the opposite effect with Bitcoin.  The scarcity and challenge to get Bitcoin should drive price up.

Most people aren’t aware but the current banking system was not meant to handle the demand of our global business needs.  We have created patches over the years via mobile apps and website ecommerce solutions but the back end systems has not changed.

They don’t even send money. They send messages. No different than an IOU.

The currency is transferred days later after the messages are received and confirmed. Then you are charged ridiculous fees.  They are doing everything they can to disguise the issue but the reality is, they can’t compete with 20th century technology and time is running out.

The governments and banks of the world will not be left out of course. They need to be in charge. They can’t let silicone valley create such a disruptive technology that they become obsolete.  They also can’t let countries like China or other emerging regions try to replace the US dollar.  There is too much wealth and too much control that would be given up.  This is why they are working together.

There is much evidence to support that systems are being built right now, an entirely new monetary and economic infrastructure to replace what we are currently using. The fiat cash system will die. We will transition into a digital and cashless society.

For years we have been speculating on it happening. Now we see it unfolding in front of us.

These are the REAL reasons Bitcoins are better than cash

The greatest transformation of wealth is happening right now and those who are educated and prepared have the potential to become mega wealthy. We can’t guarantee anything of course but we are confident that 2017 was a drop in the bucket compared what the massive waves of people who will be flooding into the crypto market once mainstream media and banks announce partnerships with crypto companies and start endorsing the digital revolution.

Hi, I'm Patrick, the owner and main writer for Cryptowhat.com. I discovered Bitcoin in 2014 and felt so strong about the positive impacts the blockchain technology will have on our society that I launched Cryptowhat so I could share this info with the world. If you like this article, then please follow us on Facebook and Twitter for more information about making money with Bitcoin.