An Overview of Oracles, ‘on-chain’ and ‘off-chain’ data in the Blockchain

Data volumes are exploding; in the last two years, more data has been created than in the entire history of the human race. It has become the new gold. Centralized storage and data centers used to be a decent place to store and manage, until recently, we discovered how vulnerable they are to malicious hacks, physical deterioration, censorship, and government bureaucratic manipulation.

With the world switching to the blockchain as a haven and for more transparency of data. We have witnessed a surge as Blockchain supply chain market size valued at $93.16 million in 2017 is projected to reach $9.85.91 Billion by 2025 it is without a doubt the technology of the future. But there is one crucial component that is still missing – A way to link off-chain data with on-chain data, that’s where oracles come in. More on them later.

What Is Blockchain Technology?

Aside from the definition provided above, the term blockchain refers to a chain of blocks. Data is stored in blocks, which are then accumulated and secured as transactions on the network continue. The chain of blocks is linked to each other, making it difficult to lose track of the history of transactions.

Furthermore, each block is time-stamped, with information such as the time, date, and number of transactions made public.

Smart contracts are free computer programs that exist in a blockchain. They are run automatically to check for conditions of facilitation, verification, or enforcement. Blockchain enabled the securing of automated programs, making them impenetrable to tampering. Developers can now create and deploy blockchain-based applications (dApps). The Ethereum blockchain is a good example of a smart contract application.

How Is A Block Built Into Blockchain?

Any new block in the chain is created by hashing the transactions sent by network participants. Take, for example, when they ask to send cryptocurrencies or save files. The block should have a block number (its position in the chain), a data field, a cryptographic hash, and a Nonce associated with it.

The Nonce (Number Used Once) function is used to generate a valid cryptographic hash. For example, suppose there is a requirement that the hash output contains four zeros in the lead (like the case in this output: 00001acbm010gfh1010xxx). Otherwise, it will be null and void. The nonce is used to make it valid.

A nonce is a random number that must be changed manually and many times by guesswork before being fed into the algorithm or hash function with the rest of the block data. It must return a valid block that follows the rule or target, such as starting with four zeros.

This is exactly what miners do in Proof of Work algorithms; the mining software incrementally guesses the number beginning with one. It keeps guessing until it gets a hash output that meets the specified criterion or target.

The time it takes to make a correct permutation for a specific block data set varies by blockchain, with Bitcoin taking 10 seconds, Ethereum taking 3 seconds, and so on. In the case of Proof of Work, the miner who makes the correct guess is rewarded with cryptocurrency.

Once mined, the block is added to the previous chain, making it immutable or unchangeable, but also publicly accessible via blockchain explorers.

The double-spending problem is addressed in cryptocurrencies by ensuring that the first confirmed transaction is added to a block while the second is rejected. If both transactions are chosen by different miners at the same time, the one with the most confirmations is added to the chain, while the other is rejected.

One advantage of the chain, which results in immutable blocks, is that if data on any block is changed, it will notify anyone on the network that there has been a change on block number x.

Furthermore, the new set of data as a result of the modification will now have a new signature. It means that this new block will not be chained to the rest of the chain and will break the chain, preventing all subsequent blocks from chaining to the original chain. Miners will reject block number x as invalid and return to the previous record of the blockchain, where all previous blocks are chained together.

However, data changes may occur as a result of a software update and upgrading via a process known as forking. Miners can choose to update to the new version and continue with the new chain, or they can stick with the old chain.

How Data And Information are Secured Using Blockchain?

To secure user data, blockchain employs cryptography, which employs public and private key encryption and decryption computer algorithms. Encryption converts raw data transmitted over a network such as the Internet, a blockchain network, or in save mode to an unreadable format that makes no sense to third-party readers.

This means that transacting and exchanging information on a blockchain is secure and private. Before one user sends data to the second, the first can encrypt the data with a public key, and the second can decrypt and read the information with a private key that was associated with the data during encryption. It is for this reason that blockchain is regarded as one of the most secure technologies for securing data in organizations.

Security is a critical feature. For example, because a blockchain allows a digital asset to be transferred from one user to another, stored, or used to purchase a product, this value must be impossible to duplicate, steal, or forge.

Blockchain Storage: What is Off-chain data

Blockchain Storage: What is On-chain data

On-chain data is the information of all transactions that have occurred on a specific blockchain network – or, to put it another way, all information written on the blocks of a blockchain. In the case of a public blockchain, this information is visible to everyone.

On-chain Vs Off-Chain Data on the Blockchain

Off-chain transactions are not executed (or are only partially executed) and recorded on the blockchain. This is in stark contrast to on-chain transactions, in which the value transfer occurs on the Blockchain network and is thus recorded.

In a more traditional sense, the two types of transactions are known as “on-record” and “off-record” transactions: Consider the following scenario: you are required to transfer a sum of money to X’s account. You can discharge your liability by following the standard procedure of transferring the value to X’s bank account via your bank account or a third-party vendor, such as Paypal. Alternatively, you may prefer to settle the debt by funding coupons and sharing the code with X, or simply exchanging your PayPal password with X. While the bank or third-party provider typically charges its customers a fee for their services in the first case, the alternative practices allow individuals to avoid transaction costs.

Off-chain transactions can also occur in a variety of ways in a blockchain ecosystem. The most basic off-chain settlement involves the exchange of private keys, which grants full access to the owner’s funds. This prompts us to consider the various reasons why a party might prefer an off-chain transaction over an on-chain transaction. Another factor is the high transaction costs associated with exchanging cryptocurrencies. The miner fee, especially for meager transactions, could exceed the amount to be transferred, rendering such a transaction economically unfeasible when executed on-chain.

A lasting solution to the on-chain and off-chain saga is oracles, or more specifically, decentralized (blockchain) oracles.

How do Oracles Work on the Blockchain? 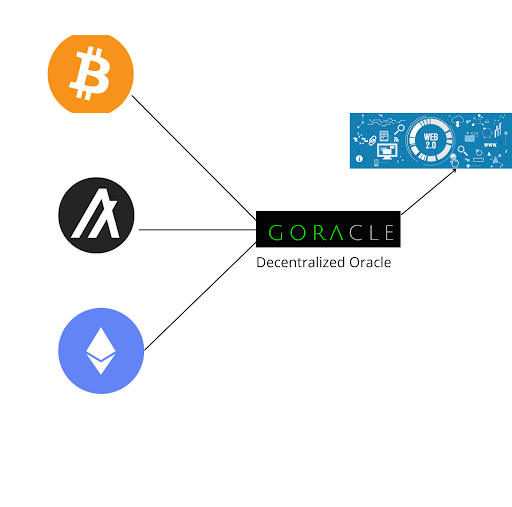 The decentralized Web 3.0 ecosystem cannot access current data sources, legacy systems, or complex computations without the usage of oracles, which allow smart contracts to execute depending on real-world input and output. A blockchain oracle acts as a link between the blockchain and the real world. In other words, they link On-chain and off-chain data. They function as on-chain APIs that can be queried to obtain data in real-time for your smart contracts. This data could range from price information to weather forecasts and even betting. Oracles can also be bidirectional, allowing them to “send” data to the outside world or receive it.

Here’s a practical use case: On Algorand, every node in the network must replay every transaction and guarantee the same result. APIs allow for the introduction of potentially variable data. If you used a price API to send Algo tokens based on an agreed-upon $USD value, the query would return a different result each time. Not to mention the possibility of the API being hacked or deprecated. If this occurs, the network’s nodes will be unable to agree on Algorand’s current state, effectively breaking consensus.

Oracles solve this issue by storing data on the blockchain. As a result, any node replaying the transaction will use the same immutable data that has been publicly posted. To accomplish this, an oracle is typically composed of a smart contract and some off-chain components that can query APIs and then send transactions to update the smart contract’s data regularly.

NFTs and the On-Chain Spectrum

Oracles are necessary for NFTs to become widespread. Here’s why; oracles track spot prices, report global events, and even allow off-chain assets to be exchanged in tokenized forms, increasing the variety of crypto assets available for trading and compounding Web3’s economic potential. As a result, oracles are critical to the proper operation of any protocol, as they require accurate data at all times.

Algoracle: Bridging On-chain and Off-chain Data on the the Blockchain

Algoracle focuses on maintaining real-world data accuracy and up-to-dateness on a smart chain contract with the least amount of infrastructure (needed to transmit data and safeguard the system). The primary goal of Algoracle’s is to ensure that the data collection and aggregation processes are as decentralized as feasible. The key stakeholders and components of Algoracle’s suggested architecture includes:Feed Providers, Node runners and Feed consumers.

Join Uphold
Previous Post
BlockCard Review: The Best Crypto Payment Card in 2022?Next Post
How to transfer BNB on Trust Wallet to Crypto.com