Flare Finance Beta Test & What You Need To Know

Digital currency has undergone numerous cycles since it was first invented in 2009. Transformations that have ensured that the digital currency world continues to evolve and be safe and secure for all shareholders, investors, and consumers alike.

Today, you might be familiar with passing Bitcoins from one wallet to another and transacting on a specific blockchain network. This limits interoperability of other coin projects and prevents full scaling. Flare Finance has much larger ambitions and plans on broadening utility across the entire crypto space by developing systems that unlock the value of all the blockchains.

This enhancement of the networks allows for every coin to become interoperable so it can leverage the decentralized finance model. It’s a major feat but it’s a total gamechanger if pulled off.

To effectively achieve their objective, Flare Network has introduced six different products and tokens to help with the automation and support the growth of the network. The firm has recently launched its beta test to the public so you can participate and try out all the latest Flare offerings.

Let’s discuss these features in detail.

What is the Flare Network?

Flare is a newly built blockchain based network that operates on the Flare Consensus Protocol. Recgonized as the first Turing Complete Federated Byzantine Agreement protocol, the Flare network uses the same style consensus and Ripple and Stellar but with the the latest addition, Turing-complete enables the network to run full smart contracts.

One major reason the Flare Network operates with a Federated Byzantine Agreement means it doesn’t rely on money or economic incentive to keep the network secure and account for consensus. While unlikely and mathematically improbable, Bitcoin, Ethereum, and other crypto projects are vulnerable to such attacks because of the competing uses and misaligned agendas of the native token.

Tokens in the Flare Network

Spark is Flare’s native token, used as collateral for trustless issuance of all assets that are are adopted into the network. This allows for merging of the Spark token with other assets to combine the use of smart contracts and can be seamlessly integrated into other networks like Ethereum.

YieldFlare has an approximate supply of 110 million tokens on its Network. The token can be earned in following ways;

After earning YFLR tokens in your wallet, you can use them in the following ways;

The reserve pool is a payment platform that allows online business and e-commerce firms to accept payments in a stable coin currency, making it easy for them to process their international suppliers’ payments. Additionally, this method of payment enable them to keep their money free from inflation. More information on this available reserve.org

It has a total approximate supply of 11,000 tokens on its Network.

It can be earned through

Like YFLR, it can also be used to vote proposals like fee schedules, mining rates, and the reserve pool.

YMIN has a total supply of 75 million tokens on its Network.

It can be earned in two main ways. By mining FLR on FlareMine and providing liquidity on FlareX to any pair with YMIN. It is mainly used as a mining rate multiplier to earn more on YFLR when staking YFIN. 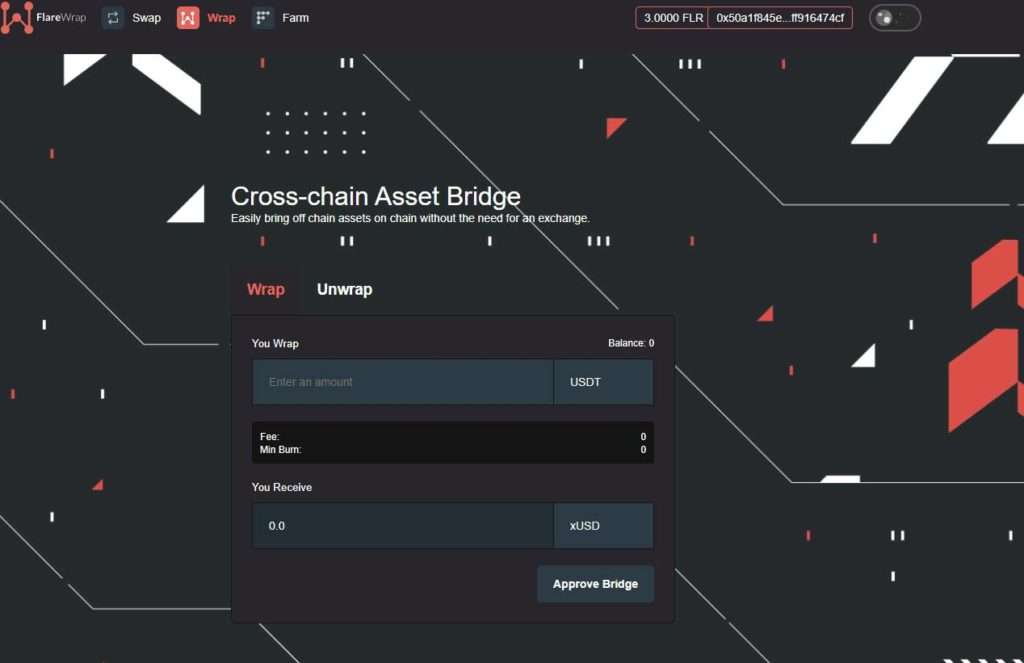 The platforms make it easy for investors and other Flare Network users to immediately access available stable coin currency by wrapping another asset and adding it to the network. You can wrap Litecoin or USD and enter into as an F-asset (Future asset) to be traded.

It is asset-backed with Decentralized On-Demand Liquidy (DODL) to enable traders to get loans against borrowers’ collateral. To qualify for the loans, traders have to pool their assets together. After you wrap your funds, you can stake your coins and provide liquidity to gain yield.

It is the most important product since it allows users on the Network to swap currencies. Secondly, it provides liquidity to liquidity pools for traders with Decentralized On-Demand Liquidity to enable them to earn passively.

It is a decentralized product that allows users to mutually share risks without engaging an insurance firm. 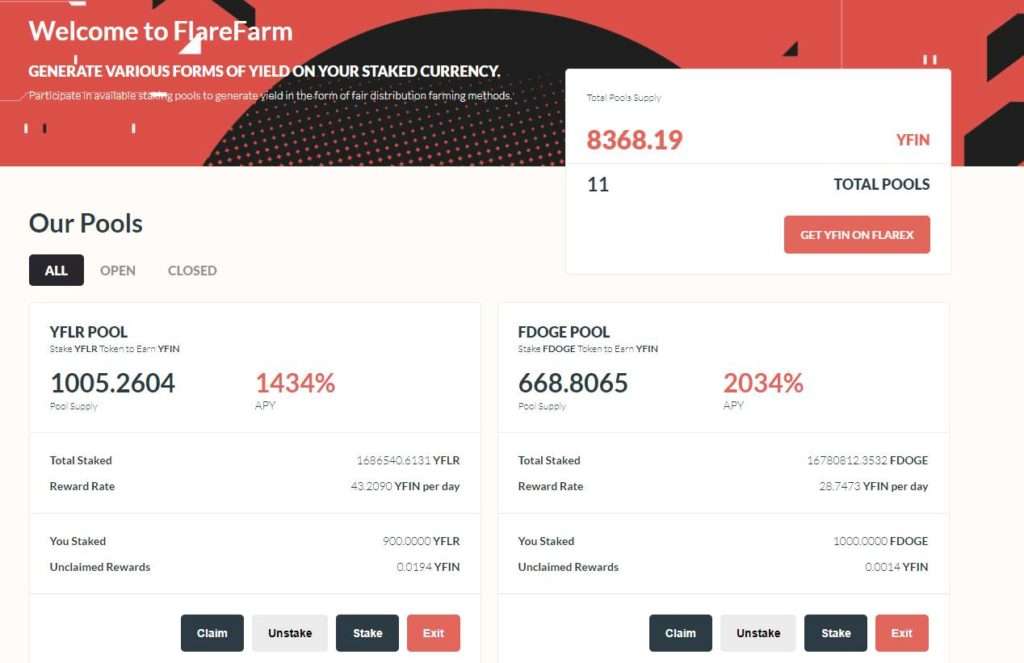 The revolutionary product allows for fair token distribution on the Flare Network. The yielding model will enable traders to stake one token to mine a pool of assets available on the Network. The tokens, NFTs, or rewards are usually distributed via smart contracts over a given period.

It is a decentralized mining network that integrates all other users of bitcoin. For instance, it allows Bitcoin owners or Ethereum mining rigs to mine FLR.

One of the first decentralized finance projects for the utility fork of the XRP ledger (Flare Finance) announced via their Twitter account that the Beta program’s public launch on 25th February 2021.

At the beginning of the year, a private beta test was conducted on the upcoming project. About 200 participants participated in the event that took place on Flare Network’s Coston testnet. After the event, Flare Finance officially announced its first public beta test.

“Soon, our platform will be open to the masses to enjoy in a test net environment along side a competition hosted to see who the Top 250 BETA Testers will be.

According to a tweet on their handle, contestants who will participate in the project’s launch will be chosen randomly. Furthermore, the Flare Finance team will award five participants with 100 XRP provided they meet the test requirements. The participants are expected to go to the projects Twitter handles “like or retweet and tag three followers.”

As CNF reported, an airdrop of FLR token will only be done by Flare Finance after the Network completes its main launch. The good news about the launch is that all users on the platform will be eligible for airdrop, except for Flare Foundation employees. During the launch, Flare Finance is expected to release up to 40 million Flares DAO that will be exchangeable YFLR.

“1 month after the main network launch of the #FlareNetwork, #FlareFinance will snapshot all balances of those who hold $FLR. 7-10 days after our snapshot, you will be proud owners of both $FLR (Spark) and $DFLR (DAOFlare)” Source: Twitter

As Flare finance continues with the preparation of the main launch slated for either the first quarter or second quarter of 2021, they are fortunate to have other partners such as Towo Labs on board. The Flare Network development team welcome the partnership with open arms because Towo Labs promised to help accelerate the launch process by assisting them in running the XRPL node from the nuclear bunker in Sweden.

Flare network started with XRP but has since added more coins that can be exchanged, swapped, and farm all under one house. You can now participate and take advantage of Flare product offerings with Stellar XLM, Litecoin, Doge coin with many others expected to be added soon.

How to get started with Flare Beta?

You can join right now and learn with the rest of us before they go live.  Flare Finance is offering a tremendous opportunity that is shaking up the fintech industry and will hopefully bring the world of decentralized finance mainstream so everyone can benefit and gain the rewards.

Make sure to join the Flare discord group, read the articles, watch the videos and get engaged. Now is the time to be learning, while we are in beta and you are using play money.  Master this now so you can be prepared and ready to profit when we go live!