Hedera Hashgraph – The future of crypto?

is Hedera Hashgraph a good investment?

Hedera does not sound as technical as Bitcoin or Ethereum but it is a revolutionary technology that is about to improve how we transact money, send/transfer files, tokenize and exchange assets. We will not be wrong if we call it the next generation Blockchain due to the seamless performance of the Decentralised ledger technology (DLT).

It is a network of computers reaching a consensus to validate transactions per time. In case you didn’t notice, Blockchain is also a type of DLT. However, the Hedera Hashgraph brings some sanity and speed to the whole ecosystem and we are about to find out if this sanity is the key to our future. But before that,

Is Hedera Hashgraph better than Blockchain?

A simple answer will be yes, the Hashgraph outperforms the blockchain in efficiency, speed, cost per transaction and security. This is largely due to Hashgraph’s design that leverages the consensus method using a sophisticated virtual voting method whereas blockchain is a peer-to-peer decentralised network.  To better understand the difference we have prepared the chart below: 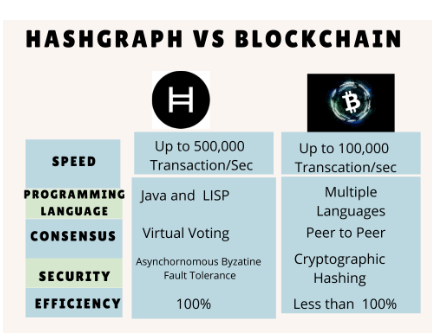 Blockchain stores data in blocks which is not the best approach but with the Hashgraph, data is stored in an acyclic graph which explains the name “Hashgraph”. Nevertheless, they are both truly decentralised.

Still on the comparison…

Security is an integral part of any decentralized system as when data is tampered with, it becomes invalid. Blockchain uses the cryptographic hashing security protocol hence if someone tampers with any block, the nodes are notified due to the change in the signature. This has worked over the years but there are two parts to it:

This two-step process is energy consuming and not friendly to the environment. It is also unable to scale quickly as the ledger needs to be replicated across the nodes to reach consensus making it impossible for transactions to be completed in seconds. Another weakness is blockchain synchronous nature like bitcoins which can be halted by using the distributed denial of service(DDoS)

On the other hand, Hashgraph uses the Asynchronous Byzantine Fault Tolerance algorithm described as the “Gold standard” for security. It is an upgrade in that the nodes are usually separated virtually, architecturally, geographically but they still need to come to a consensus before a transaction can be registered.

Trust plays a big role here as some nodes on the network might be malicious or controlled by hackers. Regardless as to whether one-third (rare case) of the nodes are corrupt, the honest nodes will still reach consensus as this is the fault tolerance. This is similar to a Virtual Voting System in that not everybody has to agree but the majority carries the vote. This guarantees improved security and lightning speed.

Blockchain is generally slower compared to the Hashgraph although the speed depends on the cryptocurrency. But for bitcoin and Ethereum you should expect 5-10 transactions per second(Tps). However, in theory, Hashgraph’s cryptocurrency can handle up to 10,000 transactions per second and 10 Tps for other services like file transfer, smart contracts etc.

It will be safe to say the Hashgraph is 100% more efficient than the blockchain and here’s why: in a situation where two blocks are mined at the same time by two different miners, only one is chosen. This means the efforts of the other miner are thrown in the trash and he will not be rewarded or compensated, this happens very often. The Hashgraphs does not build blocks hence, this is not an issue.

The HBar: Next Generation Cryptocurrency

With a 50 Billion Cap, the Hbar currently has only 3.4 Billion (<7%) in circulation. The Hbar is the custom cryptocurrency responsible for powering the Hedera public network similar to gas in Ethereum. With less than 1million transactions per day, the Hbar has a latency of 2.28 seconds.

How to buy Hashgraph

It is available on major trade exchanges some of which are:

To mention a few, for the updated list please check.

How do you store Hbar?

You can choose to use either the hardware, software or mobile wallets. The most convenient being the mobile wallet but if you are storing volumes for a long time, always go with the hardware wallet.

Similar to Ethereum, hedera also provides an alternative to the slow and vulnerable process of asset management. Developers can leverage the Hederas technology using the existing solidity smart contracts and ERC standards for fungible and non-fungible tokens. You also remove intermediaries and build confidence in areas such as gaming, finance, law and Real estate.

We live in an era where identity theft is more common than ever. With Hedera, you can manage and verify files.

Hedera Hashgraph is not Ethereum 2.0 or 3.0, it is a completely revolutionary technology that provides the speed, security and transparency of this decade. It is governed by some of the world’s leading organizations such as Google, IBM, TATA, Swisscom Blockchain, Boeing etc.

With this vote of confidence in the system, you are at rest when transacting or building a product on the network.