Blockchain is not a brand new technology that is just now coming out. It was actually developed back in 1991 by two men (Stuart Hauber and W. Scott Stornetta) whose goal had been to use cryptography to secure online data like document timestamps in blocks.

In 1992, they enhanced the basic chain structure by adding Merkle trees thus enhancing its ability to add more data to a single block. In 2008, Satoshi Nakamoto used this basic technology to create the first cryptocurrency, and he released the source code to the public so it could be further developed by others.

While blockchain-based Cryptocurrency is the main focus for media attention, the underlying protocols are being used to create some really amazing things.

Developers are looking for ways to go far beyond what the original creators intended, and they’ve done a fantastic job so far. The following areas are being enhanced using applications based solely on blockchain technology. 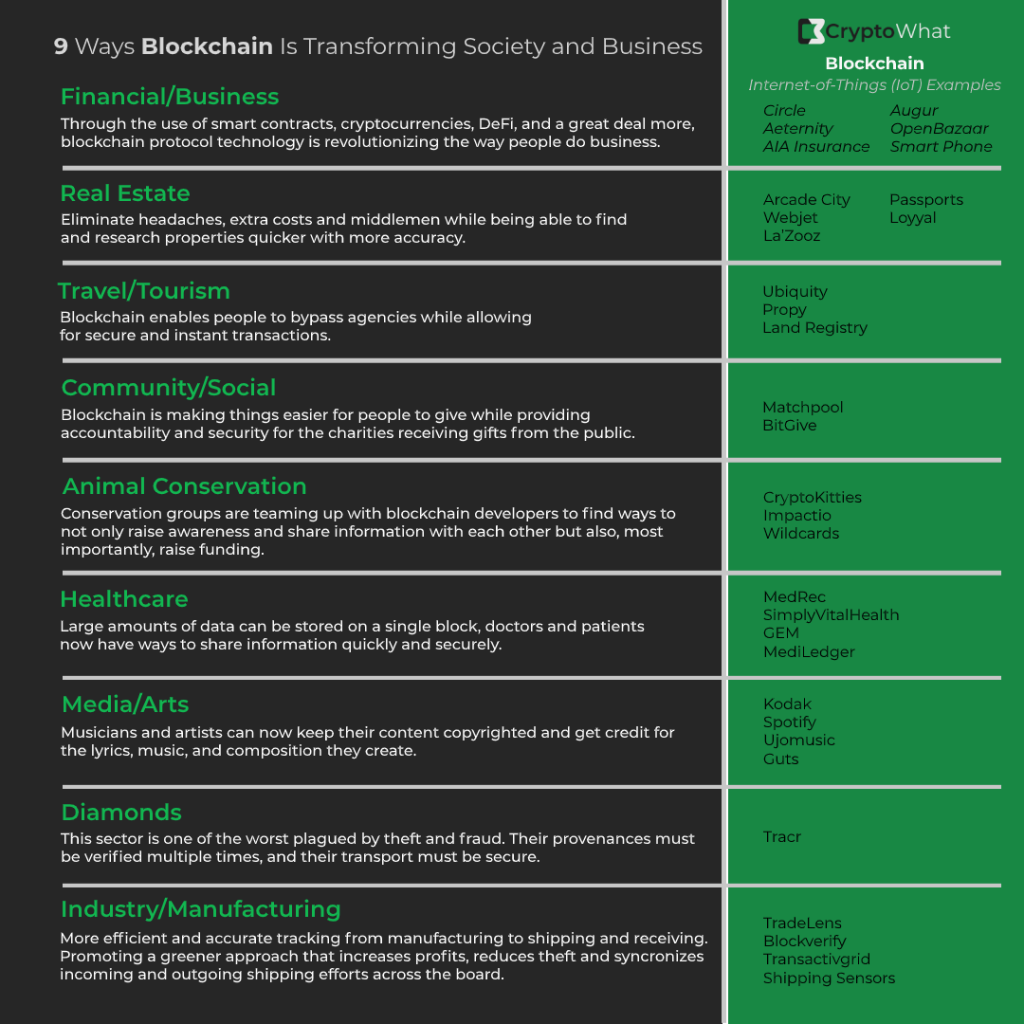 Anything with a power switch and internet access is a part of the IoT. The things inside your home can use this interconnectedness to tend to you and themselves, and they will do it securely via blockchain technology. This doesn’t stop with your home either.

Cities can be so interconnected their leaders can develop ways to better the city and its environment using the information gained by blockchain.

All of it is done securely and efficiently because the information is only inputted by and distributed to users who are verified and trusted. Examples of items that can be part of the IoT are:

The Healthcare System has been plagued by security issues since day one. Doctors and patients both worry about their sensitive information getting out and being used improperly.

There’s also the issue of being able to share the information across physical boundaries like distance.  Transference and sharing of records used to mean making hard copies and sending them via bonded courier.

Because blockchain is so secure and large amounts of data can be stored on a single block, doctors and patients now have ways to share information quickly and securely. The following are the major applications being used right now with a great degree of success:

Blockchain is working on being accepted on a global scale not only with the currencies being built on its platforms but also through the applications being developed for the finance and business sectors.

Through the use of smart contracts, cryptocurrencies, and a great deal more, blockchain protocol technology is revolutionizing the way people do business.

People in one country can now do business with someone else in another country in seconds without worrying about fraud or theft.

Here is a small sampling of the applications being developed and used to enhance the business and financial sectors the world over.

Artists the world over have been struggling with keeping their property rights safe. Musicians need ways to keep their music copyrighted so they get the credit for the music, lyrics, composition, etc. they create.

Painters, writers, and even photographers have similar issues with their various works of art. Blockchain developers have turned their attention to these intellectual property issues by making applications to deal with them.

Blockchain’s high level of security makes it ideal to use. Here are a few examples of how it’s being used.

This sector uses a lot of information in order to provide their clients with the best service they can. They also store a lot of sensitive data pertaining to their clients.

This not only includes financial data but also itineraries, bookings, and other private personal data. This information needs to be kept secure but, there have been many instances where security has failed.

There have also been instances where financial transactions between two countries have taken a great deal of time, slowing down the client’s plans.

Blockchain protocols provide the best security as well as allowing for transactions that take only seconds no matter what else is going on.

Now, travel agencies don’t have to wait for verification that bookings have been made, and neither does the client.

In fact, in many cases, the client can bypass travel agencies and do the bookings themselves knowing their information is safe.

The services also include finding rides such as Uber and accommodations like AirBnBs. The following are some applications using blockchain to make traveling easier.

Right now, finding a piece of property to buy is next to impossible by yourself. You have to do a lot of research and involve real estate agents to get anywhere.

That’s just locally. Think about if you were moving to another state or country! You’d be eaten alive by all the middleman fees!  Blockchain is being used to create large databases for this sector.

These databases record the history of every piece of property added to it. You can also buy the property you want via applications linked to the property — all using blockchain so transactions are fast, secure, and final with no need for the middleman.

The following are some applications currently being used in this sector.

These two sectors are a great deal alike in their issues which is why I’ve merged them for this article. The main issue for both is shipping; incoming and outgoing.

Blockchain is making things easier for these sectors by giving them secure and efficient ways to ship from the moment the item is created to the time it arrives at its destination.

This reduces theft and fraud by a huge margin meaning greater profits for the companies using the blockchain applications. Here are some examples of how this is revolutionizing the industry/manufacturing sectors.

Charity is a sector that is rife with fraud and theft. Huge sums of money are in flux with the giving nature of the different groups doing the work.

Blockchain is making things easier for people to give while providing accountability and security for the charities receiving gifts from the public. Here are two examples of how this is being done, and more is in the works.

This sector is one of the worst plagued by theft and fraud.  Their provenances must be verified multiple times, and their transport must be secure.

All kinds of methods have been used to handle these issues with limited success.  DeBeers is the biggest handler of diamonds, and they teamed up with a group of diamond manufacturers to create the first example of blockchain use in the sector.

Animal Conservation is a worldwide issue. Tracking, identifying, and rescuing endangered animals are major goals for a lot of groups across the globe.

Sharing this information has proven to be another challenge these groups face. Conservation groups are teaming up with blockchain developers to find ways to not only raise awareness and share information with each other but also, most importantly, raise funding. Here are a few examples.

Blockchain has come a long way from its simple roots, and it’s still got a long way to go. Blockchain protocols and platforms have teams of developers focusing on creating solutions for just about everything society is dealing with.

This article only showed a small sampling of the many ways blockchain is being used. From personal use to entire countries, blockchain is helping to make things faster and more secure for everyone.

Bitcoin vs. Ethereum – How do they compare?

President of El Salvador buys the dip and adds 150 bitcoins for roughly $6.8 million

pNetwork hacked for 12.7 million dollars due to bug found in codebase