How many Bitcoins are left to be mined in 2022?

Bitcoin’s scarcity is one of its most important characteristics, which is why it’s critical to understand how many Bitcoins are left. The relevance of a limited supply has never been more apparent than now, as central banks all over the world continue to print money at an alarming rate.

Bitcoin’s market cap is now about 10% of the market capitalization of gold. This means bitcoin is still incredibly undervalued and has plenty of upside potential.

Every year, only half a million bitcoins are mined, yet two million bitcoins are said to be lost forever. There will never be more than a specific quantity of Bitcoin available in the market at any one moment. As a result, Bitcoin is the hardest and most sound money on Earth.

How Many Bitcoins are There Today?

The current supply of Bitcoin is around 19 million, mining near 90% of the entire supply. On average 900 Bitcoins are mined each day.

There are a couple of ways to follow Bitcoin’s circulating supply. The best Bitcoin tracker is Messari, which includes a wealth of data on the current supply. Blockchain.com gives the same information in graphical form.

How many Bitcoins are left to be mined? 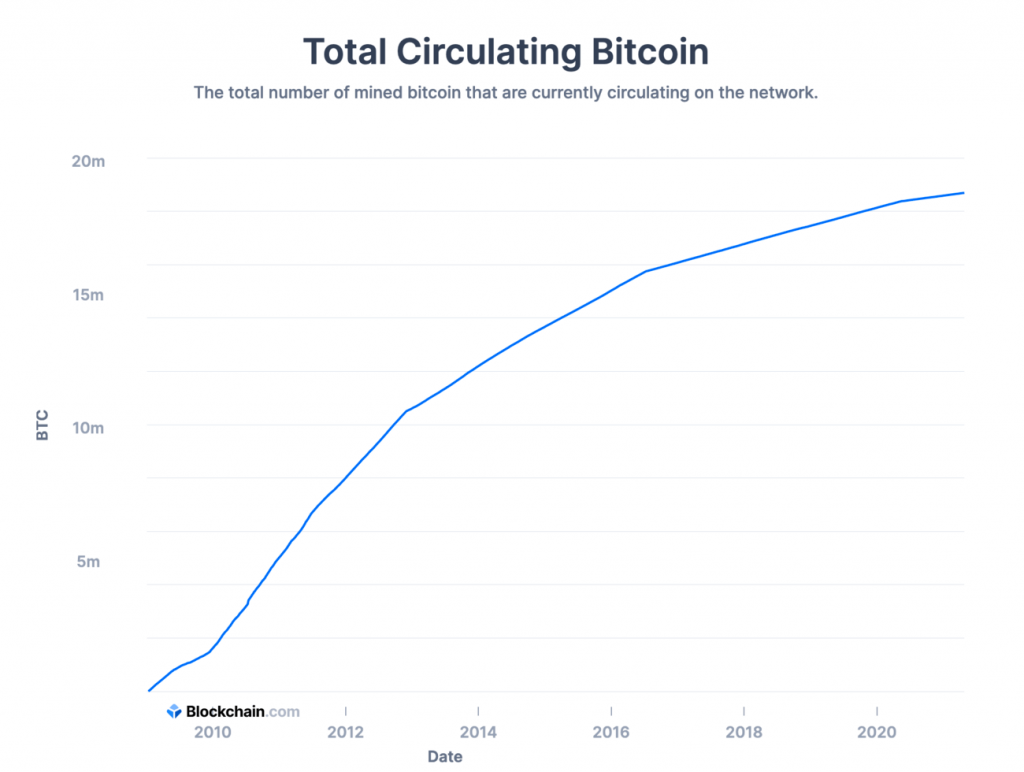 There will only ever be 21 million Bitcoin in existence. This is a fixed supply and there will never be more coins created.

At the time of writing, roughly 2,163,000 bitcoins are left to be mined according to blockchain.com.

The last bitcoin will be mined in 2140, making Bitcoin completely deflationary. There will be no more bitcoins generated after this point; nevertheless they will be divisible.

Bitcoin is a type of cryptocurrency that is created in the process known as mining (more on this below). Anyone can become a miner and buy computer hardware that solves complex mathematical equations to release bitcoins into the market.

The miners who solve these equations verify transactions on the Bitcoin blockchain. Miners are rewarded for keeping the bitcoin ledger up to date and validating transactions with bitcoins.

Every four years the number of Bitcoins produced per block (a new block is created every 10 minutes) are cut in half. Currently the mining reward is 6.25 Bitcoin per block. In 2024 it will drop to 3.125 BTC per block.

What Happens when All Bitcoins are Mined?

Since all of the bitcoins will be mined once Bitcoin mining has ended, there is no more new BTC to add to the existing amount.

The major worry about all of the Bitcoin being mined is that there will be no security budget. The Bitcoin network pays out $3.3 billion in BTC each year to secure it, on average, at a price of $10,000 per BTC.

Once we reach the point where no more Bitcoin are being mined, how will the network incentivize miners to keep securing it? The obvious answer is transaction fees, but will they be lucrative enough to ensure miners keep mining?

While it’s good to think about this eventuality, the truth is that this event is more than 100 years away. For those wondering when will all Bitcoins be mined? The answer is approximately 2140, although it could be a bit earlier or later, depending on how block times change.

Previous Post
What Are the Benefits of Paying With Bitcoin?Next Post
Coinbase vs. Robinhood: comparing and deciding the better crypto exchange