Is Your Cash Safe In The Bank? Only If History Doesn’t Repeat Itself

Is Your Cash Safe In The Bank?

You have probably seen cartoons portraying the man who keeps his cash stuffed in a mattress because he “does not trust banks.” Is your cash safe in the bank? It is humorous because we think he has gone crazy and we are the ones being smart with our money having it in a bank, gaining that extra interest on our money, giving us that protection against inflation, but who is actually being more financially wise with their money? Let’s find out. 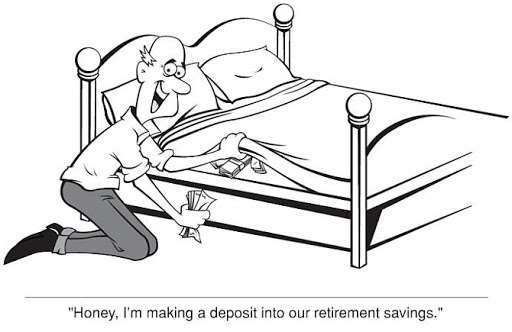 Whose Money Is It?

Understand: a bank is a for-profit business, and the main way they make their profit is by collecting interest on loans. They make these loans with your money. Or at least, it used to be your money.

As of the Dodd-Frank act of 2015, this is no longer so. Now, when you deposit money in the bank, that money becomes the property of the bank, and you have just made an unsecured loan to the bank.

That is what FDIC was created to do – prevent bank failures during the Great Depression. However, we are no longer living in the 1930s. The FDIC holds assets in the billions of dollars, whereas banks today have outstanding derivatives in the trillions of dollars. This means that if lots of banks went under at the same time, FDIC would not have enough money to cover everyone’s deposits. Thanks to Dodd-Frank, banks can use your deposits to pay off their debts.

How can this impact you and are you at risk?

What Happened in Cyprus Can Happen Anywhere

In 2012-13, the domino effect of financial crises across Europe, triggered years earlier by the US subprime mortgage disaster, reached Cyprus, in part because Cypriot banks held large amounts of Greek debts. Unlike in the US, where “too big to fail” banks received a bail-out of taxpayer money, the approach used in Cyprus was what is known as a bail-in. The Cypriot banks took money out of depositors’ accounts to cover their losses.

From the banks’ point of view, it was a success; and since Federal banking regulations are written by lobbyists for the banking industry, bail-ins have been extended around the world and written into law. Similar events have already occurred, for example, in Greece, and then again in Italy where the bail-in of four small banks there triggered the suicide of a pensioner whose life savings disappeared.

Even if the bank does not take your savings account funds, there is no guarantee that you will have access to them. Have you ever tried to use an ATM and been refused, not because your account had insufficient funds, but because the ATM did? This happened on a far larger scale during the Greek financial crisis. When the news of the crisis reached the public, so many people went to withdraw their money, the ATMs ran out. 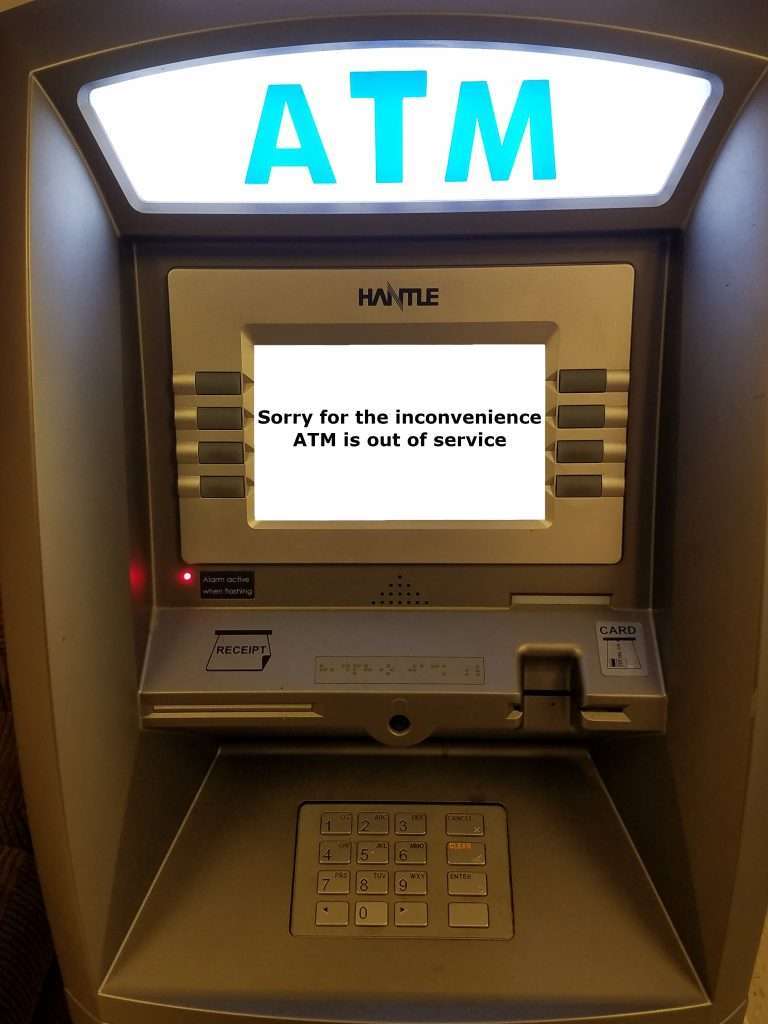 What good is money on a ledger if you can’t get it? And even if you can withdraw, many banks place a limit on the amount of money per cash withdrawal, and the number of debits to your account allowed per month.

Why should they care what you do with your money? They need to meet their currency reserve requirements, which means keeping money in the bank. If just 25% of a bank’s customers withdrew their money, there would not be any more cash to withdraw.

Do Not Count On Interest

In times of recession, financial policymakers may consider negative interest rates – in effect, paying borrowers to borrow. This is intended to stimulate the economy by encouraging borrowing and lending, but the flip side is that it discourages saving.

In several countries, such as Switzerland and Denmark, banks have begun passing negative interest rates on to their depositors, effectively, charging them interest to keep their money in the bank. At present, this is only applied to the largest depositors; but as economies become increasingly stressed, this will create an incentive to extend such policies to smaller accounts.

It must be realized that your bank does not have your interests at heart. Despite misleading official explanations, the Greek financial crisis was caused, not by excessive public spending, but by banks in countries such as Germany and France – who had extensively loaned to Greek banks – protecting themselves at the public’s expense.

Is There An Alternative?

Another solution is gold but the citizens of theses countries who needed to pay their bills could not easily obtain gold. The better and easier option was Bitcoin and other cryptocurrencies. The families could receive Bitcoin over their phone and take care of their basic needs at a time they needed it the most.

Many people use cryptocurrencies for speculative purposes and many individuals have accumulate significant wealth but this was not the original purpose.

Initally, the agenda of cryptocurrency was to be independent of the banking system. Because cryptocurrency is not controlled by a government, its value is strictly based from supply and demand, and the utility that it provides to its users, whether merchants or consumers.

This is, in fact, taking money back to its origins, as a means of measuring the value of one good or service bartered for another. Of course, the problem with using, say, the weight of gold dust to measure value is that it can be faked; a dishonest person might try to pay with fool’s gold. China is currently in the middle of a large investigation dealing with counterfeit gold accusations after 83 tons of gold was found to be fake.

The reason states had to take control of money and declare official currencies was because of this problem of counterfeiting; an official coin or banknote, with the government-mandated design, was meant to be recognizable as the real thing. The problem, of course, is that counterfeiters just got cleverer; the detail on real currency got more elaborate and more difficult to fake, and in turn, counterfeiters looked for a way around that.

The way cryptocurrencies are structured, using blockchains, prevents this endless race against counterfeiting, which in turn means that government control is no longer needed. Each Bitcoin transaction is a permanent record that can’t be altered or destroyed and you can’t create more Bitcoin out of thin air.

Some people might be nervous about cryptocurrency because of stories about hackers stealing them. But after reading this, can you tell me the bank is any safer? Have you been a victim of identity theft? I have. I withdrew cash from an ATM, using my debit card. Next thing I knew, my bookkeeping software emailed me about unusual withdrawal activity from my account (I keep my accounts linked for just this reason).

It turned out that someone had skimmed my debit card, and was making cash withdrawals – and did not even need to have my debit card in their possession since it was still in my possession. Thanks to the bookkeeping software, I was able to cancel the card and stop the thief’s spree in just three days; if I had had to wait until my monthly statement came out, I would have lost a lot more!

The Problem with Exchanges

One problem with cryptocurrency exchanges is that, as is the case with banks, the currency stored in them belongs to whoever has the digital key. Cryptocurrency exchanges hold the keys to all the wallets used for trading. If a hacker gets hold of these keys, they can simply transfer all the money in those wallets into their own wallet, and there is no way for anyone to get it back. But your own digital wallet, separate from the exchange, is yours. Only you have the key. So, when not using your cryptocurrency to trade, remove it from the exchange and keep it in your digital wallet.

Here is a list of popular cryptocurrency cold storage wallets.

You Can Have Independence

Some people are surprised to discover that they are denied a bank account. Too many bounced checks, outstanding overdrafts, even having been a victim of identity theft can cause a bank to reject you, not just for a credit card, but even for a bank account. If this happens, you need to go through their procedure, which is of course designed to work in their favor, not yours. But this is not so with Bitcoin.

If you can buy the Bitcoins, you can use Bitcoin, trade on the exchanges, and have a digital wallet, without regard for past financial mistakes. Bitcoin has no daily spending limit, no time delay when transferring internationally, and lower fees than banks. Best of all, because only you hold the digital key, only you can access your money – no levies.

Of course, with this kind of independence comes a certain responsibility. Because only you hold the key, if you forget it, there is no way to do a password reset, as conventional banks can do. Your wallet provider does not know your key. To ensure that your digital currency does not effectively vanish forever, keep your key secure, where you can always find it or remember it. Create backups, stored in different locations. Or, use a hardware wallet – a device that stores your keys internally. It signs the transaction, but it never transmits the key outside itself.

There are serious flaws in the banking system, and your money is not as secure you have been told. Cryptocurrencies like Bitcoin can be a safe alternative, separate from the corporate banks and the governments that prop them up. As these currencies are increasingly accepted in the world marketplace, ordinary people will increasingly be able to break free of a financial system that is holding them back from taking control of their money.