People play NFT games and they make money. A lot of money! NFT games have not yet taken over the gaming market but the model is so attractive for gamers that it will be hard for traditional games to compete.

Here is a list of the most popular NFT games you can play right now to earn an income. Most games allow to you sign up and play for free on this page with a few that require payment to buy unique and special in-game items NFT items. 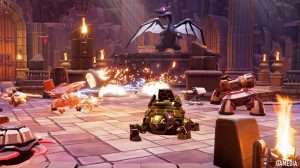 Spider Tanks is a PVP Brawler designed and developed by award-winning Netherlands based GAMEDIA. Players choose between a number of Tank Bodies and Weapons in the garage, then battle it out in one of the many Spider Tanks arena maps. Spider Tanks is free to play, but also incorporates a variety of play-to-earn mechanics. Whether you want to play with a small group of close friends, or test your skill in high-stakes competition, Spider Tanks will be the worldwide play-to-earn esport for you.

Echoes of Empire is an epic sci-fi strategy game set within a galaxy at war. Build, upgrade, and own a fleet of epic spaceships used to control their sector of the galaxy. Players will decide to go solo or join up in massive guilds to wage combat over the scarce resources circulating the system. Once they obtain enough resources they will need to muster and master the economic centers of their Command Station where they can upgrade warships, craft new weapons, and repair their fleet.

Fortified is an epic PvP Tower Defense game set in a fantastical medieval world. Compete with one another to build the best tower defense strategies, utilizing everything from basic arrows and archery to the arcane arts. Compete with players on your own terms on your own land, or meet on neutral territory to battle it out to see who will take home the prize. Player ownership of assets is an important part of each part of the game, but those without land or NFTs will still be able to join and compete, potentially earning part of the prize pool!

In the world’s first play-to-earn town builder built by Gala Games, players use NFT in-game items to complete Daily Challenges and gather TownCoin rewards! 600 million people have played town and farming games, but who’s the best? Town Star will find out! Create a productive town and see how you fare against our emerging global champions!

Generate profits by buying, raising and selling tokenized digital pets known as Axies. Axie Infinity is a play-to-earn NFT game that has taken the world by storm in recent months developed by the Vietnamese game studio Sky Mavis.

Splinterlands is a fun and addictive game with frequent airdrops, potion upgrades, and new card packs and designs. It’s a blockchain collectible trading card game in which all of your cards are assets that you can verify. The game may be played on iOS and Android devices.

Kids played video games in the past because they were entertaining. They spent hours obtaining to the next stage, rescuing the princess, and vanquishing the evil menace.

The games became more sophisticated as a result of this, with digital goods like as a blade or an uncommon and unique object becoming available along the road. You may occasionally hear of individuals paying for things in games because they are rare or unusual.

In the World of Warcraft game, which was one of the first non-NFT games people were able to earn a living by playing through exchanging WoW gold, their in-game currency which has real market value and can be bought and sold via auction.

In the game. there is a very rare flying mount (looks like a dragon) which is incredibly difficult to find. It has multiple spawning locations and it is almost impossible to find a single spot. Some players also speculate that it even changes realm during its flight which makes it almost impossible to track and if you get your hand on one of these mounts then you can sell them for a very high price.

This has only set the stage for the next evolution of games—with fresh set of objectives, including investment possibilities and potential earnings streams. Welcome to the exciting world of “play-to-earn” crypto-based video games. Yes, this is already a reality.

Who doesn’t want to get paid to play their favorite game?

There are over 2 billion people that play video games and less than 100k people playing NFT games. The potential is enormous!

Even though NFT gamers can earn more than most sports athletes, not all are going to be winners.

Not sure what an NFT is?

What is an NFT?

NFT stands for Non-Fungible Token. It is a type of crypto token that is not interchangeable with other NFTs. This means each NFT is unique and can not be interchanged with another token.

NFTs are a relatively new technology, but have been implemented by many different gaming platforms as a way of receiving rewards or tokens in games instead of receiving credits or money.

Until recently, the only way to make money playing games was through competition. With NFT gaming, the NFT tokens acquired in NFT games have real value and can be turned into money or used to buy special items that exist within NFT games’ own platform economy.

Increase in interest has led to the development of NFT game developers creating NFT games that reward participants with crypto. Players who choose to play these NFT games do not need any prior experience regarding crypto exchanges, they just play the game, receive their tokens and then sell them on an exchange for real money if they want to.

Here is a list of the most popular NFT games you can play today to earn crypto.

How to profit with NFT games

There are many different types of NFT games that require varying degrees of knowledge about crypto. Some will provide you with enough information so that you can sell or trade on an exchange immediately while some may not give you any information at all, meaning that if you want to use the tokens outside of the NFT game, you would need to learn how exchanges work first.

Despite the fact that chasing after Bitcoin and attempting to time the cryptocurrency markets may appear difficult, crypto is rapidly bleeding into gaming, offering unprecedented opportunity.

You don’t need to learn how to trade crypto to make money when you can play games from the comfort of your home.

This is the future. Those who see this trend now and take action can create life-changing wealth. Not financial advice but just watching the trend and don’t see it slowing down anytime soon.

There will be scams make sure to always do your own due-diligence and research before you participate in NFTgames.

You can find games available to play for free but many of the NFT games are built so those who invest gain the highest chance for success and to maximize their earnings.

Check out forums, talk to NFT game players as well as devs of the games. Many of them, if trustworthy, are findable on Twitter or other social media.

If the developers have prior game-related experience and “success,” it’s a safe bet they’d want to continue doing so.

NFT games are the future, which is why it’s important to stay on top of the trends within this growing industry.