BTC dominance is an important metric in the cryptocurrency world that is essential to take note of while trading and viewing the market to have a better view and understanding of the entire cryptocurrency market movements.

Bitcoin dominance shifts from day-to-day as the market ebbs and flows, but bitcoin has consistently taken up a large portion of the cryptocurrency market over the past few years.

What is BTC dominance?

Bitcoin dominance refers to the percentage of the total market capitalization that bitcoin represents.

By market capitalization (market cap), Bitcoin is the most valuable cryptocurrency in the world, commanding a significant portion of the trading volume (and attention) in the cryptocurrency markets.

BTC dominance is used to describe Bitcoin’s share of the global cryptocurrency market capitalization. Although, because there were few competing digital currencies until the ICO boom, Bitcoin had a 95 percent market share until March 2017. However, during the 2017 bull market, Bitcoin’s market share dropped from over 95% to 35% by January 2018.

What is a Market cap?

The term “market capitalization” (or “market cap”) is used in the blockchain industry to describe a metric that measures the relative size of a cryptocurrency. It’s calculated by multiplying a coin’s or token’s current market price by the total number of coins in circulation.

When you look at the $1.133 trillion figure on its own, it doesn’t mean much until you compare it to other markets. The total estimated value of the gold market, for example, is close to $10 trillion. This means that the value of Bitcoin is roughly 11% of the value of gold.

While Bitcoin was by far the most popular cryptocurrency-and one of the few still in existence-for many years, its dominance was much closer to 100 percent than it is now. However, as new cryptocurrencies emerged, Bitcoin’s dominance began to dwindle. This could most likely be attributed to the rise in popularity of initial coin offerings (ICOs) following the introduction of Ethereum and the ERC-20 token standard, causing a great depreciation in BTC dominance.

This means that if Bitcoin’s price falls but the rest of the cryptocurrency market falls at the same rate, Bitcoin’s dominance is likely to remain unchanged.

When Bitcoin was the only cryptocurrency that could be traded on exchanges, it had a near-complete dominance. However, with more cryptocurrencies entering the market, BTC dominance is no longer 100 percent, but that is neither a good nor a bad thing. It’s just a tool to help us gain a better understanding of how the crypto space is changing and expanding.

Bitcoin’s dominance began to depreciate once again in 2021, as interest in altcoins grew in response to negative news about Bitcoin’s energy consumption and China’s ban on Bitcoin mining, both of which put a strain on investment.

If we look closely at the formula that produces the Bitcoin dominance ratio, we’ll notice that these two variables are included in the equation:

The total market capitalization of all cryptocurrencies

The Bitcoin dominance ratio is greatly influenced by these two main factors.

Relationship between the Market cap and BTC dominance

The shape and direction of the total crypto market cap will, in general, follow that of Bitcoin. This is due in part to Bitcoin’s sway over the entire crypto market, as it is the first, largest, and most well-known cryptocurrency.

As crypto traders and investors, we take it for granted that the majority of the world’s population is unaware of the crypto market’s scope. As a result, they may believe that Bitcoin is the only cryptocurrency available.

As one might expect, Bitcoin faced few competitors in 2013. It had a 94 percent market share at the time. Although back then, ERC-20 tokens didn’t exist, Ethereum was just a figment of Vitalik Buterin’s imagination, and stablecoins like Tether (USDT) didn’t exist.

All of that began to change in 2017, with the start of the first altcoin season. BTC’s market dominance was 85.4 percent in February of that year (ETH had a 5.7 percent share of the cryptocurrency market cap, while Ripple’s XRP had 1.1 percent.)

According to CoinMarketCap, total market capitalization in USD increased by 470 percent from $20 billion to $114 billion during the same period.

During this time, Ethereum supporters began to talk about the “Flippening,” in which Ethereum’s market cap would “flip” higher than Bitcoin’s — something which, however, never happened.

Bitcoin prices plummeted after the first bull run in 2017, and by January 2018, Bitcoin’s market share had dropped to an all-time low of 32.8 percent, signaling the start of a bear market.

Unfortunately, the alt season had come to an end as well, with many first-time investors losing large sums of money as ICO projects failed.

Ernst & Young analyzed data from initial coin offerings (ICOs) that launched in 2017 and a year later. They discovered that

These sobering statistics have prompted regulators in countries such as the United States to take a dim view of ICOs, filing lawsuits against several blockchain projects that have completed token sales. Investors should expect volatility in digital assets, according to government bodies, which issued investment advice that was essentially the same as telling people to stick to the stock market.

BTC dominance returned to some extent after the bullish bubble burst, reaching highs of 70% in September 2019. However, it’s unlikely that BTC will ever break through this barrier.

Cryptoassets are now more diverse and richer than they were in the early 2010s. Various Bitcoin hard forks have occurred, including Bitcoin Cash (BCH). New crypto market trends like DeFi have shifted liquidity to Ethereum, and now that the ICO frenzy has died down, we’re starting to see some digital assets with compelling use cases gain traction.

How to interpret BTC dominance in Trading Decision

The BTC dominance TradingView chart displays these figures in a clear percentage format, allowing users to quickly determine whether BTC dominance is at 40% or 60%, for example.

Users can also check out the Real Bitcoin Dominance Index, which compares btc dominance to proof-of-work (PoW) coins that are attempting to become a form of money.

Because many altcoins, such as stablecoins, aren’t trying to compete with Bitcoin, the Real Bitcoin Dominance Index may provide a more realistic long-term picture of Bitcoin’s dominance.

While it’s incorrect to say that Bitcoin dominance is a perfect representation of a bear or bull market, there are some similarities. Bull markets, for example, may result in lower BTC dominance because funds are typically pouring into altcoins at that time.

In bear markets, traders may be pulling their funds out of altcoins and putting them into Bitcoin, which is a more reliable asset.

Is btc dominance a reliable indicator?

Cryptocurrency markets are complex ecosystems. As a result, no system can be reduced to the use of a single indicator. Bitcoin dominance is just one of many indicators that can be used to describe the current market situation.

As a result, relying solely on Bitcoin dominance as an index will almost certainly result in losses and/or inconsistency.

One flaw is that the number of altcoins has only recently begun to proliferate, lowering the dominance ratio. As a result, we don’t have a lot of historical data to work with when looking for recurring patterns.

Furthermore, if the number of altcoins continues to grow in the future, the ratio may become smaller and smaller, eventually reaching new lows. If this occurs, the Bitcoin dominance index may become obsolete. 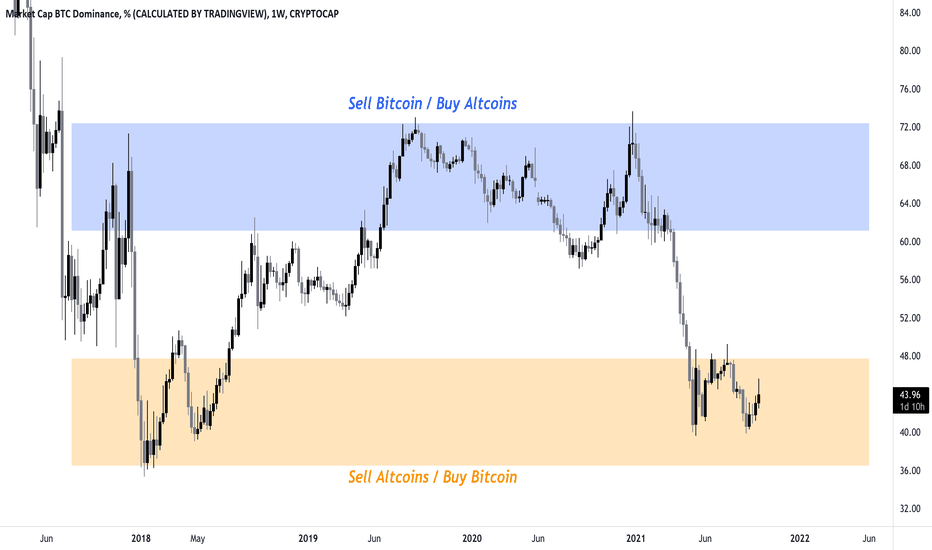 At its highest point, bitcoin dominance was at around 82%. This means that bitcoin’s market capitalization was greater than that of all other cryptocurrencies combined.

What does bitcoin dominance mean for investors and traders?

For one, it indicates that bitcoin is still the king of cryptocurrencies. It is the most widely-known and most widely-traded crypto, so it naturally has the largest market cap. Bitcoin’s dominance also means

Bitcoin dominance is important because it gives us an idea of how much influence bitcoin has over the cryptocurrency market. A high bitcoin dominance means that bitcoin is more influential than other cryptocurrencies. This can be good or bad depending on your perspective.

Keep in mind there are now close to 20,000 altcoins on the market, so even a small percentage of the total market cap can represent a large amount of money.

The reason why bitcoin and altcoin dominance are important is because they give us an idea of which direction the market is going. If bitcoin dominance is going up, it means that bitcoin is gaining market share. This usually happens when the price of bitcoin goes up or when altcoins go down in value.

On the other hand, if bitcoin dominance is going down, it means that altcoins are doing well relative to bitcoin. This usually happens when the price of bitcoin goes down.

Tips for trading during bitcoin dominance

There are a number of things to pay attention to when trading during bitcoin dominance.

1. First, you need to understand what bitcoin dominance is and how it affects the market.

2. Second, you need to pay attention to the trend. If bitcoin dominance is going up, it means that bitcoin is gaining market share. This is usually a good time to buy bitcoin.

3. Third, you need to be aware of the risks involved in trading during bitcoin dominance. The most obvious risk is that bitcoin could lose market share to altcoins. This would cause the price of bitcoin to go down.

4. Finally, you need to have a plan for both buying and selling bitcoin. We can’t predict the future, but having a plan will help you make the most of any market situation.

There are no guarantees when it comes to trading, but if you understand bitcoin dominance and the trends, you’ll be in a better position to make successful trades.